THE GAME IS NOW OVER! 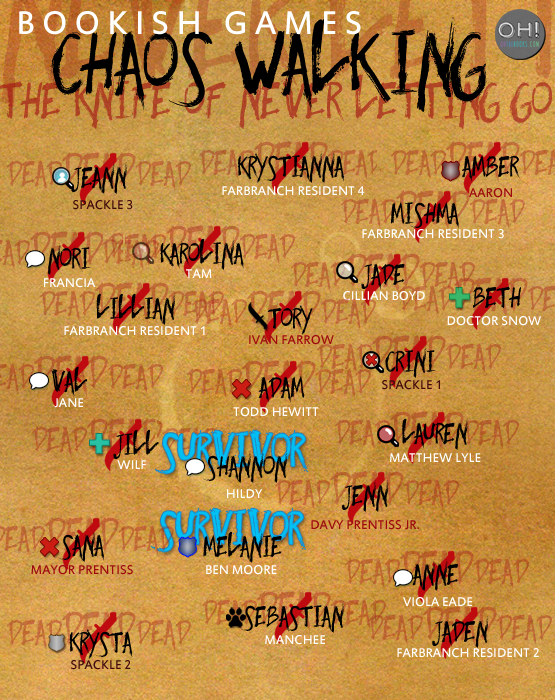 TEAM TODD WINS! I have to admit, I wasn’t expecting this outcome for the longest time. Team Spackle seemed to have this game in the bag from the very beginning thanks to Krysta’s ballsy move (which definitely wasn’t planned) and for a while there it looked like no one would ever catch them.

Fortunately, between Jill’s quick thinking at the end (after interestingly saving Jeann from Amber’s attack the Night before), the fact that the mafia teams somehow let a confirmed townie live (I’m sorry Shannon, but if I were evil you would’ve been killed a long time ago, haha), and Melanie’s 1x lynchproof immunity (if the Spackle didn’t try to get her voted out Day Seven there’s a good chance they would’ve won since Day Eight would’ve then likely started with 2 mafia vs 2 townies depending on if Jill saved the right person) Team Todd just happened to squeak by with a win. Congrats!

PRIZES: Shannon and Melanie, as the survivors of the winning team, you are entitled to a Chaos Walking Edition survival postcard. Please make sure Kelley has your mailing address ASAP if you would like one.

Inspired primarily by the first book of the Chaos Walking series, The Knife of Never Letting Go, there were a couple of twists built into the set-up of this game (some originally there and some added due to the reboot). These twists included: Neighbors, an Unlyncher, Deathproof players, and two Mafia teams. Read on to find out more (and beware since there are some spoilers for the first book):

The Neighbors were actually supposed to be a play on the “noise” element from the Chaos Walking series. In the books, everyone can hear/see the men’s thoughts. The women, on the other hand, can have private thoughts. I wanted to try and represent this some way within the Games and thought that giving the women of the game (Viola, Hildy, Jane, and Francia) their own private chat page where they could have thoughts no one else could see would be a decent representation.

Of course, I was a little worried that this private page would make the women too powerful, especially if they knew they were all on the same team. With people getting voted off with only four or five votes in the Games, the women had the potential to dominate the votes each Day. As a result, I decided it was necessary to create a little caution within the group by assigning the women Neighbor roles instead of Mason roles. The four Neighbors were informed in their role emails that their alliances weren’t guaranteed and to take that information how they may and… well… unfortunately for them they did just that.

As many of you have probably realized by now, we didn’t completely overhaul the game for the reboot. We changed up the identity of a majority of the players, but the set-up remained relatively the same apart from a handful of roles. (I really wish I would’ve overhauled it like I really wanted to at the time, but unfortunately things didn’t work out that way.)

The Unlyncher was one such role that was changed. Originally Manchee, played by Adelaide during the first attempt, was a back-up Roleblocker. For the reboot though we decided to add a little twist and change Manchee’s role to that of an Unlyncher. Now, I’m going to be 100% honest here and admit there were two main reasons for this change: 1) I had been spending a lot of time looking at the wiki during the reboot and really liked the idea of including linked roles. Not necessarily for this specific game, but for some game in the future. And 2) the plan to cause trouble between Adam and Sebastian with the conflicting cop roles was thwarted and we needed something new to stick them together (because we’re evil like that).

In the end, we thought the Unlyncher role would be perfect for Manchee. Now, looking back at the Games, I think it would have been better if we gave Sebastian some sort of ability to help aid him in protecting his unlynchee since he was sort of powerless between Adam painting a target on himself by insisting Krysta was mafia (even though he was right) and Anne throwing herself in the spotlight with the Neighbor fiasco, but hindsight is 20/20. I can at least say it’s a good thing that we added Anne to his role, because originally he was only linked to Adam!

This is the other slight change we made when setting up the reboot: we made it so each team had a chance at surviving an elimination. One Spackle was bulletproof, one Prentisstown was deathproof, and one Todd member was lynchproof (all 1x as well). I do admit that this power has the potential to knock the game off balance, and as mentioned above I do think it was one of the reasons why Team Todd managed to snag the win, but I really liked it for the characters involved when I was setting up the game and thought by providing each team one type of immunity it would be fair.

The last twist in this game was the existence of two mafias: Prentisstown and Spackle. Now, during the original set up for this Game (even before the first edition we actually ran), I had it organized as Prentisstown being the Mafia and one Spackle as being the SK since I felt that reflected the book fairly well. When I expanded the set-up to include the five extra people who wanted to play the Games though, I ended up changing the Spackle to a separate Mafia team. (I actually probably would’ve used a different book from the series to base the game off of if I knew I were going into it with multiple mafia teams from the beginning.)

As always, here is the information for the secret pages and access to the master sheet where we kept track of each Day/Night actions. If you have questions about anything, don’t hesitate to ask!

And This is Goodbye…

[Note: This post originally ended with Asti retiring from the Bookish Games and passing ownership of it to her co-blogger Kelley. Kelley was unable to launch a new version of the Bookish Games after Asti’s departure, but fortunately late 2018 Asti changed her mind and decided to host the Games once again, hence the launch of this The Bookish Games website.]