The Game is Now Over! 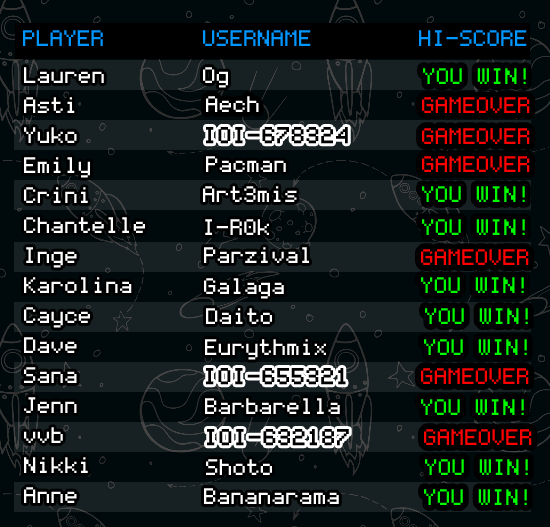 I’m pretty sure that in the history of Bookish Games, this was the first one to end in only three days. Now, this game was also different than all the others in two ways:

But still… DANG, you guys.

Here’s how it went down.

DAY/NIGHT 1: Poor Emily got voted out for silly reasons on day 1, but Asti certainly made up for it by using her Sword of Ba’heer to take out Yuko during the night! I must admit that I was kind of excited when Asti ended up being Aech, because I knew she wouldn’t be afraid to hold back with the night kills. And she’d already made it worth it be eliminating a Sixer and inheriting The Catalyst from Yuko. But why didn’t the mafia’s target die in the night? Well, they just happened to target the only player with a 1981 Quarter — Inge — which totally saved her booty.

DAY/NIGHT 2: Confusion reigned supreme during Day 2, but by the end, the votes had miraculously moved away from a four-way tie, and focused in on vvb, the second Sixer to go down in as many days! And since vvb held the Orb of Osuvox, it was randomly award to one of the players who voted her off: Lauren. Don’t you know, Lauren got her hands on that orb RIGHT on time, because Sana sent in her night kill asap and targeted Lauren. Meanwhile, Crini decided to use her Chucks to investigate Sana, revealing that Sana was NOT a Gunter. And Asti was determined to kill off Inge, who was now vulnerable since her 1981 Quarter has since been expunged.

DAY 3: By now I’m sure that Sana was wondering what the heck was going on with the Night kills and why none of the mafia’s targets were dying in the Night! But thanks to Crini‘s investigation skills, Asti decided to take one for the team and detonate The Catalyst and the final Sixer was eliminated. And then like a whole day of confusion continued until I could come back and explain. Sorry about that, everyone. I hate not having computer/internet access!

Well, with such a short game, we can’t really determine more than one MVP, and I think we can all agree that it’s Asti. She took out TWO Sixers in three days. Yes, Sana was probably already on her way to being voted out, but who could resist getting to FINALLY detonate that Catalyst? Way to go, Asti! Your investigative skills might be obsessive, but they were also quite valuable to Team Gunters.

Congratulations to those of you who survived suspicion and won the game! If you’d like your congratulatory post card, please be sure to send me an email with your mailing address by Tuesday, January 6!

By now, I’m sure it’s obvious that I did not change much at all from the Ready Player One setup. I decided to keep all of the artifacts with their original characters, even though I had contemplated switching them around. (What happened was: I assigned all the roles and then realized I hadn’t moved the artifacts around, so I decided it was too much work to go back and do it over again, and I was pretty happy with the way the roles had been randomly assigned. So… I kept it.)

As always, here is the information for the secret pages and access to the master sheet where I kept track of each Day/Night actions. If you have questions about anything, don’t hesitate to ask! For the secret pages, I needed to find a new method to keep them private, since Asti has access to everything on this blog. So I decided to go with secret groups on Goodreads, and it seems like it worked out pretty well.

We will be doing another round of Bookish Games, but we’re not sure when it will happen. Maybe March, maybe the summer… Most likely, the theme will either be The Grisha or The Bone Season (if you have a preference, let us know your preferences in the comments!)