Welcome to the Bookish Games, a variation of the game Mafia (aka Werewolf) that was previously hosted at A Bookish Heart and is now hosted at Oh, the Books! For each game, a popular YA book is chosen to be the theme and players are assigned different character roles and powers. Their end goal is to ensure that their team is the last one standing, even if they don’t know who their other teammates are.

THE GAME IS NOW OVER! 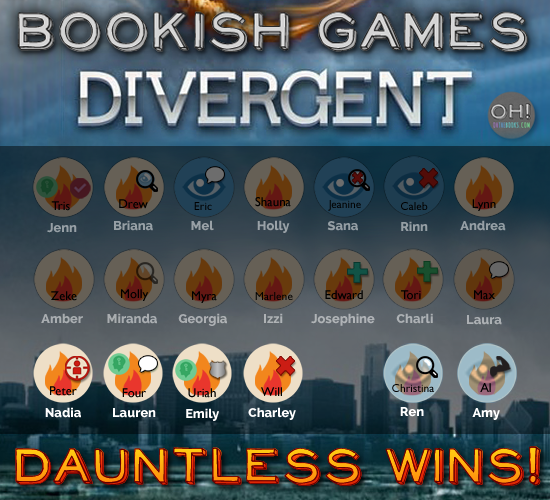 After eight grueling Days, Team Dauntless shocked us all by  eliminating the last Team Erudite member, Mel, to secure their win. Congratulations to the surviving Team Dauntless members: Nadia, Lauren, Emily, and Charley! It was a close call, but you somehow managed to pull it together in the end.

Some of you may have noticed Asti’s Evil Mastermind t-shirt back in March, which was actually a test run for one more addition we wanted to make to the Bookish Games. We’ve chosen two players who played hard and well throughout the entire game, and their actions had a big impact on the way things played out.

But what about everyone else who survived — especially those players who ultimately ended the game and won the day for Team Dauntless?

Each one helped contribute to Team Dauntless’s success in some pivotal way – whether by role blocking an important move (Charley), killing off a major baddie (Nadia), or revealing a secret that helped secure the deadly fate of another baddie (Lauren).

Don’t worry, you guys get prizes too! We’ll be sending each of you some official Bookish Games swag, so be on the lookout for an email from Kelley or Asti very soon!

This game contains major twists that were inspired by the book Divergent. As mentioned when players signed up for the game, the game contains some spoiler-y aspects, and while it is not necessary to read the book to play the game, playing the game with knowledge of the book can really help (or hinder) the experience. If you haven’t read the books and are super paranoid about spoilers, you may want to skip over this bit.

The first twist was that Team Erudite was a Cultafia. As a Cultafia, Team Erudite could choose to either kill or recruit a player each Night. There was no limitation or restriction attached to either for Team Erudite; it was up to them each Night to decide which option they wanted to use.

If Team Erudite chose to kill someone, the kill would be carried out like usual (with it only being stopped due to bulletproofing, role blocking, etc.). Team Erudite could send anyone to complete the kills (either full Team Erudite members or their recruitments).

If Team Erudite chose to recruit someone, that player would become a Dauntless Traitor. They would still technically be aligned with Team Dauntless, but they would lose their Dauntless powers and instead have the end goal of helping Team Erudite win. In order words, they were still pretty much Townies, but with no knowledge of who the baddies were and no ability to speak on any private pages they would mainly just have to try and sabotage their Townie teammates as much as they possible to help Team Erudite win. (Only Team Erudite players could be sent out to complete recruitments.)

As you will see if you visit the wiki, this type of mafia is often not recommended for game play because it may be difficult to balance. We wanted to give it a go though, especially since it fit the book so well, so we implemented the Cultafia but added another twist (one that they didn’t know about)…

No players in the game were made aware of this Divergent ability. Team Erudite was not informed that their recruitments could backfire, and Team Dauntless wasn’t told anything about possible Divergence. Those players who were given any information about it were those who were Divergent (Emily, Lauren, and Jenn), and even then they were only told that they had the power but not what it actually meant.

We thought that the inclusion of non-recruitable Divergent would help keep the Cultafia’s power in check. Team Erudite could recruit every Night, but if they did there was a small chance it would backfire, hurting their team instead. Their recruitments also did not have any further information than what they started with, so couldn’t really cause as much damage as the full-fledged members.

Now, throughout the game there were arguments about the existence of these types of roles and some were quite adamant that they could not exist because it would not be fair. We apologize if some felt that this was the case, but really this game seemed fairly balanced and its results were largely based off the players of the game and not the set up. Looking back, there were a few areas were things could have went either way:

There are multiple instances were things could have turned either way, but in the end it worked in Team Dauntless’s favor. Both teams played smart, making major moves when needed, and I think we can all agree that it was a super close game that no one could predict!

What About the Book?

It was also mentioned at one point in the game that the recruitment twist couldn’t exist because the book isn’t required to be read before playing the game. Yes, this is true. A player can play the game without reading the book. But, we did state loud and clear when signing up for the game that this set up included a SPOILER for the book and players were warned to join at their own risk. Players should have taken that as a sign that this game was indeed deeply inspired by the book in an important way and that having read the book would have probably helped.

Of course, that same help can also hurt. Kelley and I are not fans of name-claiming. Basing someone’s innocence off their character name can be a cheap way out of playing the game. Just because someone is given a big name doesn’t mean they should coast off it and not participate. This Divergent twist meant that those who read the book would have the benefit of possibly figuring the recruitment twist out, but would also be hindered by their understanding of the alliance of certain characters within the story. Sure, those characters may be good within the book, but under the serum who can you really trust? We’re hoping that based off this game players can start to see how name-claims should not hold as much value in determining how people are aligned.

As always, here is the information for the secret pages and access to the master sheet where Kelley and I kept track of each Day/Night actions. If you have questions about anything, don’t hesitate to ask!

Bookish Games: Divergent Edition was a lot of fun. Kelley’s addition and help made the game that much better, and I personally enjoyed the added twists. I had no clue who was going to win (though I was rooting for Team Erudite. Darn it, the baddies never win)!

But of course, it’s not over yet. Another edition of Bookish Games is in the works, and this time, thanks to Kelley, we’re going outside of the hugely popular YA novels to include a manga: Death Note. We’ve been working hard on it, and can’t wait to share it with you. Sign-ups will be open on June 21st, so mark your calendars if you’re interested in joining!

0 thoughts on “Divergent Edition: GAME OVER!”